A GIF decoder: an exercise in Go interfaces

At the Google I/O conference in San Francisco on May 10, 2011, we announced that the Go language is now available on Google App Engine. Go is the first language to be made available on App Engine that compiles directly to machine code, which makes it a good choice for CPU-intensive tasks such as image manipulation.

In that vein, we demonstrated a program called Moustachio that makes it easy to improve a picture such as this one: 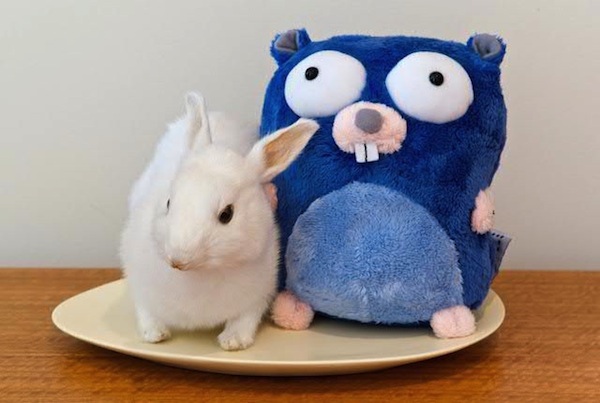 by adding a moustache and sharing the result:

All the graphical processing, including rendering the antialiased moustache, is done by a Go program running on App Engine. (The source is available at the appengine-go project.)

Although most images on the web—at least those likely to be moustachioed—are JPEGs, there are countless other formats floating around, and it seemed reasonable for Moustachio to accept uploaded images in a few of them. JPEG and PNG decoders already existed in the Go image library, but the venerable GIF format was not represented, so we decided to write a GIF decoder in time for the announcement. That decoder contains a few pieces that demonstrate how Go's interfaces make some problems easier to solve. The rest of this blog post describes a couple of instances.

First, a quick tour of the GIF format. A GIF image file is paletted, that is, each pixel value is an index into a fixed color map that is included in the file. The GIF format dates from a time when there were usually no more than 8 bits per pixel on the display, and a color map was used to convert the limited set of values into the RGB (red, green, blue) triples needed to light the screen. (This is in contrast to a JPEG, for example, which has no color map because the encoding represents the distinct color signals separately.)

Simplifying somewhat, a GIF file contains a header defining the pixel depth and image dimensions, a color map (256 RGB triples for an 8-bit image), and then the pixel data. The pixel data is stored as a one-dimensional bit stream, compressed using the LZW algorithm, which is quite effective for computer-generated graphics although not so good for photographic imagery. The compressed data is then broken into length-delimited blocks with a one-byte count (0-255) followed by that many bytes:

To decode GIF pixel data in Go, we can use the LZW decompressor from the compress/lzw package. It has a NewReader function that returns an object that, as the documentation says, "satisfies reads by decompressing the data read from r":

Here order defines the bit-packing order and litWidth is the word size in bits, which for a GIF file corresponds to the pixel depth, typically 8.

But we can't just give NewReader the input file as its first argument because the decompressor needs a stream of bytes but the GIF data is a stream of blocks that must be unpacked. To address this problem, we can wrap the input io.Reader with some code to deblock it, and make that code again implement Reader. In other words, we put the deblocking code into the Read method of a new type, which we call blockReader.

Here's the data structure for a blockReader.

The reader, r, will be the source of the image data, perhaps a file or HTTP connection. The slice and tmp fields will be used to manage the deblocking. Here's the Read method in its entirety. It's a nice example of the use of slices and arrays in Go.

Lines 2-4 are just a sanity check: if there's no place to put data, return zero. That should never happen, but it's good to be safe.

Line 5 asks if there's data left over from a previous call by checking the length of b.slice. If there isn't, the slice will have length zero and we need to read the next block from r.

A GIF block starts with a byte count, read on line 6. If the count is zero, GIF defines this to be a terminating block, so we return EOF on line 11.

It's a nice technique in Go programming to couple a slice (b.slice) to an array (b.tmp). In this case, it means blockReader type's Read method never does any allocations. It also means we don't need to keep a count around (it's implicit in the slice length), and the built-in copy function guarantees we never copy more than we should. (For more about slices, see this post from the Go Blog.)

Given the blockReader type, we can unblock the image data stream just by wrapping the input reader, say a file, like this:

This wrapping turns a block-delimited GIF image stream into a simple stream of bytes accessible by calls to the Read method of the blockReader.

With blockReader implemented and the LZW compressor available from the library, we have all the pieces we need to decode the image data stream. We stitch them together with this thunderclap, straight from the code:

The first line creates a blockReader and passes it to lzw.NewReader to create a decompressor. Here d.r is the io.Reader holding the image data, lzw.LSB defines the byte order in the LZW decompressor, and litWidth is the pixel depth.

We could avoid the temporary variable lzwr by placing the NewReader call into the argument list for ReadFull, just as we built the blockReader inside the call to NewReader, but that might be packing too much into a single line of code.

Go's interfaces make it easy to construct software by assembling piece parts like this to restructure data. In this example, we implemented GIF decoding by chaining together a deblocker and a decompressor using the io.Reader interface, analogous to a type-safe Unix pipeline. Also, we wrote the deblocker as an (implicit) implementation of a Reader interface, which then required no extra declaration or boilerplate to fit it into the processing pipeline. It's hard to implement this decoder so compactly yet cleanly and safely in most languages, but the interface mechanism plus a few conventions make it almost natural in Go.

That deserves another picture, a GIF this time:

The GIF format is defined at http://www.w3.org/Graphics/GIF/spec-gif89a.txt.