Inside the Go Playground

In September 2010 we introduced the Go Playground, a web service that compiles and executes arbitrary Go code and returns the program output.

If you're a Go programmer then you have probably already used the playground by using the Go Playground directly, taking the Go Tour, or running executable examples from the Go documentation.

You may also have used it by clicking one of the "Run" buttons in a slide deck on talks.golang.org or a post on this very blog (such as the recent article on Strings).

In this article we will take a look at how the playground is implemented and integrated with these services. The implementation involves a variant operating system environment and runtime and our description here assumes you have some familiarity with systems programming using Go. 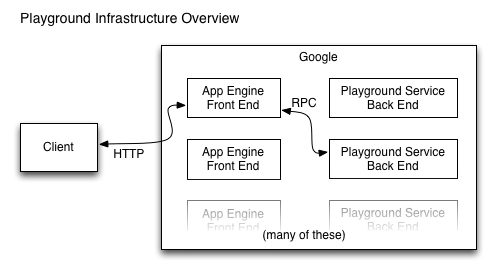 The playground service has three parts:

The back end program itself is trivial, so we won't discuss its implementation here. The interesting part is how we safely execute arbitrary user code in a secure environment while still providing core functionality such as time, the network, and the file system.

To isolate user programs from Google's infrastructure, the back end runs them under Native Client (or "NaCl"), a technology developed by Google to permit the safe execution of x86 programs inside web browsers. The back end uses a special version of the gc tool chain that generates NaCl executables.

(This special tool chain was merged into Go 1.3. To learn more, read the design document.)

Although all these things are supported today, the first version of the playground, launched in 2010, had none of them. The current time was fixed at 10 November 2009, time.Sleep had no effect, and most functions of the os and net packages were stubbed out to return an EINVALID error.

A year ago we implemented fake time in the playground, so that programs that sleep would behave correctly. A more recent update to the playground introduced a fake network stack and a fake file system, making the playground's tool chain similar to a normal Go tool chain. These facilities are described in the following sections.

Playground programs are limited in the amount of CPU time and memory they can use, but they are also restricted in how much real time they can use. This is because each running program consumes resources on the back end and any stateful infrastructure between it and the client. Limiting the run time of each playground program makes our service more predictable and defends us against denial of service attacks.

But these restrictions become stifling when running code that uses time. The Go Concurrency Patterns talk demonstrates concurrency with examples that use timing functions like time.Sleep and time.After. When run under early versions of the playground, these programs' sleeps would have no effect and their behavior would be strange (and sometimes wrong).

By using a clever trick we can make a Go program think that it is sleeping, when really the sleeps take no time at all. To explain the trick we first need to understand how the scheduler manages sleeping goroutines.

The trick is to change the condition that wakes the timer goroutine. Instead of waking it after a specific time period, we modify the scheduler to wait for a deadlock; the state where all goroutines are blocked.

The playground version of the runtime maintains its own internal clock. When the modified scheduler detects a deadlock it checks whether any timers are pending. If so, it advances the internal clock to the trigger time of the earliest timer and then wakes the timer goroutine. Execution continues and the program believes that time has passed, when in fact the sleep was nearly instantaneous.

These changes to the scheduler can be found in proc.c and time.goc.

Fake time fixes the issue of resource exhaustion on the back end, but what about the program output? It would be odd to see a program that sleeps run to completion correctly without taking any time.

The following program prints the current time each second and then exits after three seconds. Try running it.

How does this work? It is a collaboration between the back end, front end, and client.

We capture the timing of each write to standard output and standard error and provide it to the client. Then the client can "play back" the writes with the correct timing, so that the output appears just as if the program were running locally.

The playground's runtime package provides a special write function that includes a small "playback header" before each write. The playback header comprises a magic string, the current time, and the length of the write data. A write with a playback header has this structure:

The raw output of the program above looks like this:

The front end parses this output as a series of events and returns a list of events to the client as a JSON object:

The JavaScript client (running in the user's web browser) then plays back the events using the provided delay intervals. To the user it appears that the program is running in real time.

Programs built with the Go's NaCl tool chain cannot access the local machine's file system. Instead, the syscall package's file-related functions (Open, Read, Write, and so on) operate on an in-memory file system that is implemented by the syscall package itself. Since package syscall is the interface between the Go code and the operating system kernel, user programs see the file system exactly the same way as they would a real one.

The following example program writes data to a file, and then copies its contents to standard output. Try running it. (You can edit it, too!)

There is also a provision to load a zip file into the file system at init time (see unzip_nacl.go). So far we have only used the unzip facility to provide the data files required to run the standard library tests, but we intend to provide playground programs with a set of files that can be used in documentation examples, blog posts, and the Go Tour.

The implementation can be found in the fs_nacl.go and fd_nacl.go files (which, by virtue of their _nacl suffix, are built into package syscall only when GOOS is set to nacl).

The file system itself is represented by the fsys struct, of which a global instance (named fs) is created during init time. The various file-related functions then operate on fs instead of making the actual system call. For instance, here is the syscall.Open function:

File descriptors are tracked by a global slice named files. Each file descriptor corresponds to a file and each file provides a value that implements the fileImpl interface. There are several implementations of the interface:

Like the file system, the playground's network stack is an in-process fake implemented by the syscall package. It permits playground projects to use the loopback interface (127.0.0.1). Requests to other hosts will fail.

For an executable example, run the following program. It listens on a TCP port, waits for an incoming connection, copies the data from that connection to standard output, and exits. In another goroutine, it makes a connection to the listening port, writes a string to the connection, and closes it.

The implementation can be found in net_nacl.go. A good place to start reading is netFile, the network socket implementation of the fileImpl interface.

The playground front end is another simple program (shorter than 100 lines). It receives HTTP requests from the client, makes RPC requests to the back end, and does some caching.

The front end serves an HTTP handler at https://golang.org/compile. The handler expects a POST request with a body field (the Go program to run) and an optional version field (for most clients this should be "2").

When the front end receives a compilation request it first checks memcache to see if it has cached the results of a previous compilation of that source. If found, it returns the cached response. The cache prevents popular programs such as those on the Go home page from overloading the back ends. If there is no cached response, the front end makes an RPC request to the back end, stores the response in memcache, parses the playback events, and returns a JSON object to the client as the HTTP response (as described above).

The various sites that use the playground each share some common JavaScript code for setting up the user interface (the code and output boxes, the run button, and so on) and communicating with the playground front end.

This implementation is in the file playground.js in the go.tools repository, which can be imported from the golang.org/x/tools/godoc/static package. Some of it is clean and some is a bit crufty, as it is the result of consolidating several divergent implementations of the client code.

The playground function takes some HTML elements and turns them into an interactive playground widget. You should use this function if you want to put the playground on your own site (see 'Other clients' below).

To comply with the same-origin policy, the various web servers (godoc, for instance) proxy requests to /compile through to the playground service at https://golang.org/compile. The common golang.org/x/tools/playground package does this proxying.

Both the Go Tour and the Present Tool can be run offline. This is great for people with limited internet connectivity or presenters at conferences who cannot (and should not) rely on a working internet connection.

To run offline, the tools run their own version of the playground back end on the local machine. The back end uses a regular Go tool chain with none of the aforementioned modifications and uses a WebSocket to communicate with the client.

The WebSocket back end implementation can be found in the golang.org/x/tools/playground/socket package. The Inside Present talk discusses this code in detail.

The playground service is used by more than just the official Go project (Go by Example is one other instance) and we are happy for you to use it on your own site. All we ask is that you contact us first, use a unique user agent in your requests (so we can identify you), and that your service is of benefit to the Go community.

From godoc to the tour to this very blog, the playground has become an essential part of our Go documentation story. With the recent additions of the fake file system and network stack we are excited to expand our learning materials to cover those areas.

But, ultimately, the playground is just the tip of the iceberg. With Native Client support scheduled for Go 1.3, we look forward to seeing what the community can do with it.

This article is part 12 of the Go Advent Calendar, a series of daily blog posts throughout December .